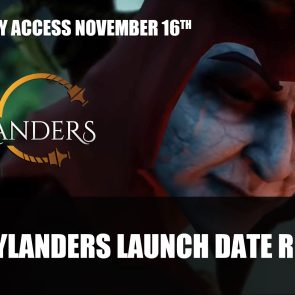 At Gamescom 2021 during the Amazing Indie showcase, The Waylanders release date was revealed for November 16th 2021.

The Waylanders is being developed by Gato Salvaje Studio  which is currently in Early Access. The Waylanders the party-based RPG has now got a confirmed release date which is November 16th 2021, coming to Steam and GOG.

The announcement also came with a 20% discount, so you can pick up the game for $27.99 USD for the next week.

Slip the bonds of fate in #TheWaylanders when it travels to Steam and GOG on November 16, 2021!

Embark on a thrilling adventure alongside mortal companions and immortal allies in this mythical party-based RPG. 20% off for the next week!

The game started out as Kickstarter project, written by Emily Grace Buck and Gavin Jurgens-Fyrhie. The Waylanders is inspired by games such as Dragon Age, Neverwinter Nights, and Baldur’s Gate.

Players take on an adventure comprised of six base classes, as they explore a Celtic-Spanish wilderness filled with warring factions, monsters and magic corruptions. Build alliances, even pursue romantic entanglements and follow a story of a cultural shift and conflict.

While being in Early Access The Waylanders has had a number of updates with the latest adding further pet types for the Ranger class. The developer also shared a sneak peek at Ranger Advanced Classes.

The Waylanders will leave Early Access on November 16th 2021 coming to GOG and Steam.