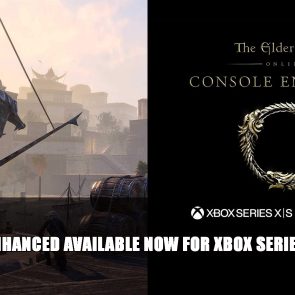 The Elder Scrolls Online Console Enhanced is now available for Playstation 5 and Xbox Series X|S running at 4K or 60FPS.

The Elder Scrolls Online Console Enhanced is now available, a free upgrade for base-game for all ESO owners. The update takes advantage of Xbox Series X|S and Playstation 5 graphic capabilities, running at 4K or 60FPS. This includes a number of improvements including draw distance, textures, reflections, shadows, load times and more. Those who own ESO on Xbox Series X|S, PS5, Xbox One or PS4 will receive free access to ESO: Console Enhanced on next-gen.

Xbox Game Pass members will also receive the benefits of Console Enhanced when they play on Xbox Series X|S.

Official features for console enhanced can be found below:

Players can also now experience the latest chapter in ESO following the Gates of Oblivion storyline, Blackwood. Blackwood launched on consoles on June 8th bringing with it the new companions system, Oblivion Portal, a new trial and more. If you want to know what thought of this latest expansion be sure to check out our The Elder Scrolls Online – Blackwood Chapter & Update 30 Review.

Recently Zenimax also announced an ESO Plus Free Trial which is available until June 21st. You will be able to explore all of the game’s DLCs including the recently added Greymoor zone and the Flames of Ambition dungeon DLC. ESO Plus also grants access to the Craft Bag, bonuses to XP and Gold gains and more.

Want more Bethesda news? Be sure to check out next Starfield Release Date Announced; Xbox Console Exclusive And PC.