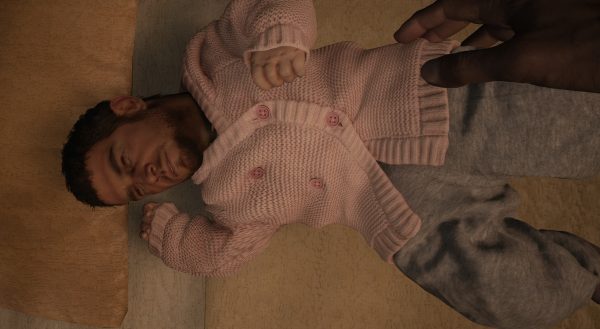 Forget lycans and vampire ladies, the real horror of Resident Evil Village are these subtle mods.

Resident Evil Village is officially out everywhere, which really opens the floodgates for all sorts of mods. Surprisingly, the first of those didn’t concern the giant vampire lady people are thirsting after.

Modder JTegh has instead created something much more horrific. Their Mini Me Chris mod switches baby Rose from the opening few minutes of Village, with Chris Redfield. Yes, that’s a mini Chris Redfield, hence the name, being caressed by Ethan and Mia Winters.

The astonishing thing here is that baby Rose is only visible for a few brief seconds, so if you’re not actively paying attention, you may not see it. But that didn’t stop JTegh from leaving facial animations in place, which look a little unsettling playing on Chris Redfield’s grown man face.

“This was a dumb joke that popped into my head so I had to do this,” said JTegh to explain themselves.

You can live with this abomination yourself by downloading and installing this mod, and you can grab it from Nexus Mods. Considering that Village has broken records on PC, the potential audience for this mod is big.

For more sensible coverage of Village, we have a full Village walkthrough that’ll take you through the entire game step by step. For more specialised guides, see our tips for what treasures to sell, or these guides for the game’s piano puzzle and Hall of Ablution Statues puzzle.

The post Someone replaced baby Rose with Chris Redfield in Resident Evil Village and it’s horrifying appeared first on VG247.