Following fan outcry over the 8-hour window of PS5’s Resident Evil Village demos, Capcom has extended the final, multi-platform demo by a week. Instead of lasting for only 24 hours, Resident Evil’s Twitter revealed the new Extended Final Demo will run from May 1 at 5pm PT/8pm ET/1AM BST (5/2) to May 9 at 5pm PT/8pm ET/ 1am BST (5/10). 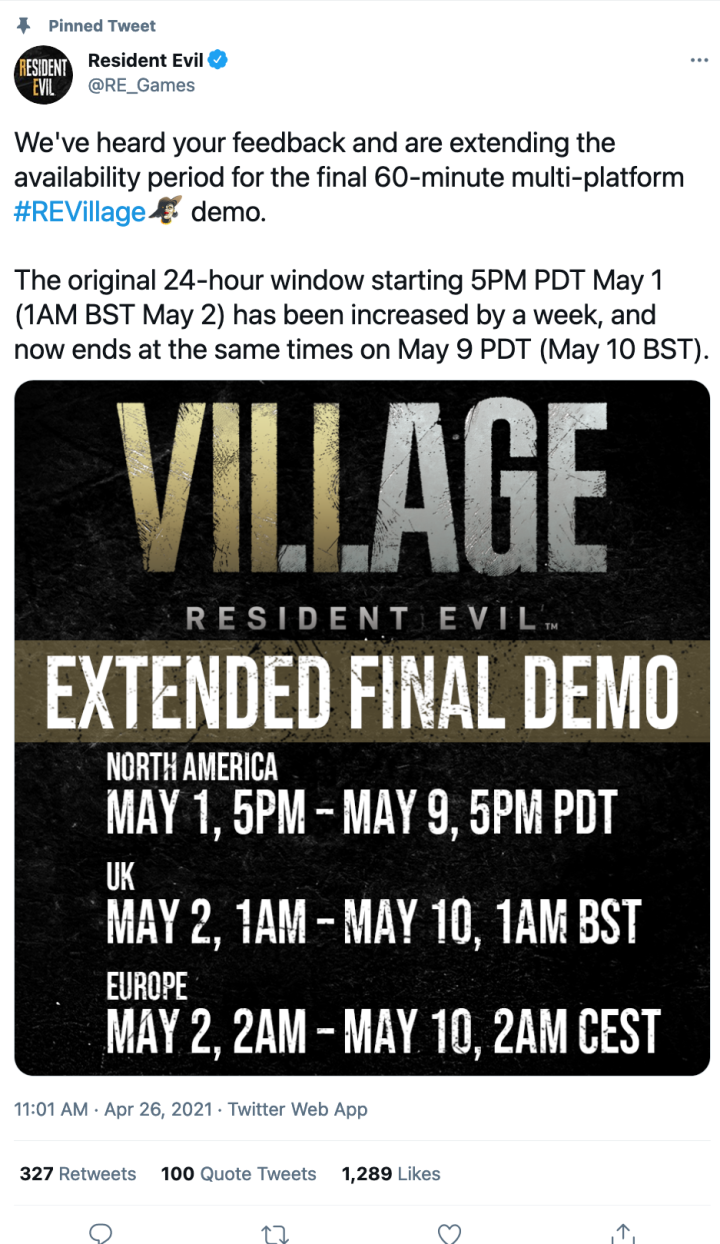 This final demo for Resident Evil Village will still only let players play for a total of 60 minutes between the Village Demo and the Castle Demo, which were separated by a week for PS5 players in their exclusive first demos. While some took issue with the 30-minute limit for each of the first two demos, the biggest complaint was its 8-hour window of availability. These demos started at 5pm PT/8pm ET/1 am BST, which is late in the day in North America for most and even later for those in Europe and elsewhere. If you were busy or sleeping or otherwise unable to spend time on your PS5, you were out of luck and could not try the demo at all. [ignvideo url=”https://www.ign.com/videos/2021/04/25/resident-evil-village-14-minutes-of-the-castle-demo-gameplay-full-playthrough”] Fortunately, Capcom heard the feedback and will make it a bit more convenient for those with different schedules and life responsibilities. For more on Resident Evil Village, which is set to be released on May 7, 2021, check out the great reference to Resident Evil 4 you will be able to see in the demo, all of the game’s villains, and our thoughts after five hours of trying out the latest entry in the horror franchise. [poilib element=”accentDivider”] Have a tip for us? Want to discuss a possible story? Please send an email to [email protected]. Adam Bankhurst is a news writer for IGN. You can follow him on Twitter @AdamBankhurst and on Twitch.