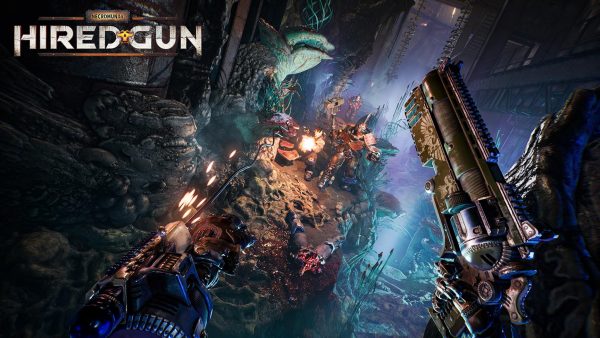 Necromunda: Hired Gun has served up an action-packed new trailer.

Necromunda: Hired Gun, the new FPS from StreumOn, was one of last month’s surprise reveals. Hired Gun is a frenetic, fast-paced shooter in the same vein of the new Doom, set in the Warhammer 40,000 universe.

If the initial reveal trailer didn’t sell you on it, today’s drop delves a little deeper into the world of the game, and explores a few of the things you’ll be up to in this grimdark future. It also doubles as a bit of a brief about Necromunda, a Warhammer 40,000 setting you don’t often seen in games.

In Hired Gun, you play as a bounty hunter roaming the world of the Underhive. Martyr’s End acts as the game’s hub, which is where you’ll pick up bounties from the various guilds and anyone with influence, buy information about your targets and more.

In other news, developer StreumOn has been acquired by Focus Home Interactive, the game’s publisher. StreumOn is the small French team behind E.Y.E: Divine Cybermancy, and Space Hulk: Deathwing more recently.

Necromunda: Hired Gun is not far off, either, coming to PC, PS4, PS5, Xbox One, and Xbox Series X/S on June 1.

The post Necromunda: Hired Gun’s new gameplay only makes us more excited to play it appeared first on VG247.