The post King Arthur: Knight’s Tale Patch v0.0.4 Breakdown – What It Means And What We Want To See Next appeared first on Fextralife. 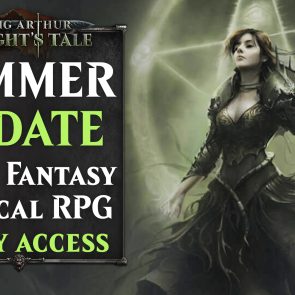 One of the games that caught my attention at the start of this year was King Arthur: Knight’s Tale because of the amount of builds you can customize and its challenging Combat System. This June, Neocore Games released Patch v0.0.4, which was by far the biggest update since the start of Early Access. In this King Arthur: Knight’s Tale Patch v0.0.4 Breakdown, I’m going to discuss the major changes they’ve deployed including but not limited to hero recruitment and buildings that you can upgrade in Camelot, as well as the changes we want to see next in the Summer 2021 Phase.

We’ll first talk about recruitable Heroes followed by a new recruitment system when you encounter them in Missions.

There are three new recruitable heroes, namely, Sir Balin, Sir Tristan and Boudicea. In order to enlist them as well as the others you meet, you’ll have to participate and complete their corresponding story quests. Once finished, you’ll be able to swap the heroes you like the most while leaving some of them in Camelot or training them to gain XP and to level up via the Training Ground. 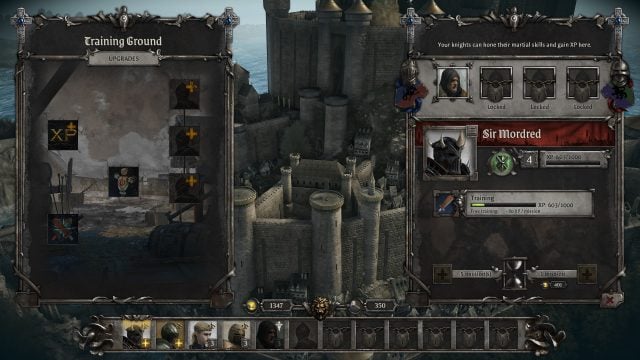 The heroes you take with you on missions have their own Traits or unique perks. So for instance with Sir Balan, he has the Progressive Trait that allows him to level up faster as compared to his fellow knights. Meanwhile, Sir Kay possesses the Talented Trait that lets him spend only 1 Skill Point to learn new Skills instead of 2. These are just some of the characteristics you’ll have to consider on top of Classes when you invite them in quests because it can mean life or death in some cases.

After every mission, you’ll be able to visit Camelot, which you will be rebuilding through out the course of the game. In turn, you’ll receive upgrades to cure heroes of their injuries in the Hospice or to pay less when purchasing items via the Merchant. 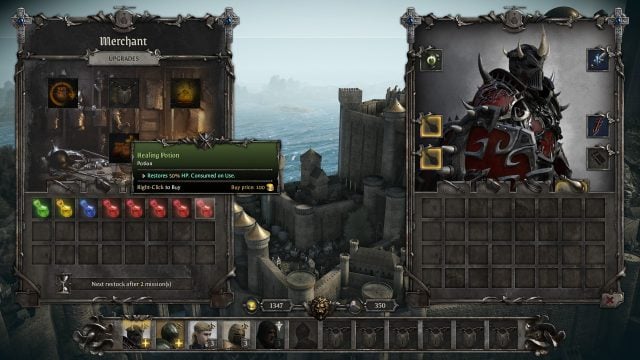 In the Round Table, you can invest in a number of new upgrades to strengthen your relationship with those you’ve recruited and to receive bonuses in the form of resources and damage buffs. With Leadership 1, 2 and 3, you’ll be able to expand your active Hero List because of the Hero Slots you unlock. Those who do not fit in this list will stay in the Round Table and they can then be swapped from time to time.

Next are Court Titles, which allow you to bestow knighthoods to your heroes in order to improve their Loyalty towards you. The higher their corresponding Loyalty Points, the more damage buffs and Action Points (AP) they’ll receive in missions. Maintaining good relationships with your heroes is vital since it determines their effectiveness in combat to some degree. Conversely, disputes resulting in negative Loyalty Points will cause damage penalties and it can even be the reason for their growing animosity against you. In addition to these two upgrades, you can gain bonuses such as additional resources by ratifying Laws and issuing Decrees. 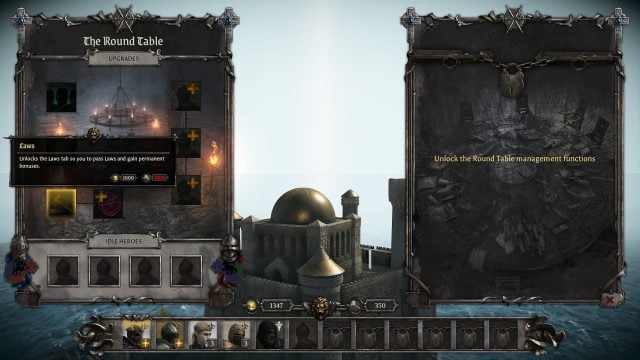 Lastly, The Crypt or Burial Grounds is now available. You can visit this area to pay respects to fallen heroes.

In Patch v.0.0.4, Act 1 is now fully accessible, which is worth more than 10 hours of content, out of the total 4 Acts that Neocore Games is planning for this title. Specifically, there are 3 new story missions as well as redesigned side and random missions. Because of these changes, any saves you’ve had before will no longer work so you’ll have to start fresh.

After every mission, you’ll be notified of new Events that you’ll have to partake in. Choosing the best options is of paramount importance as it can yield you with extra resources, XP, Morality and Loyalty Points. However, note that some choices are detrimental to you and your party since it can result in the removal of Hero Traits, or worse. 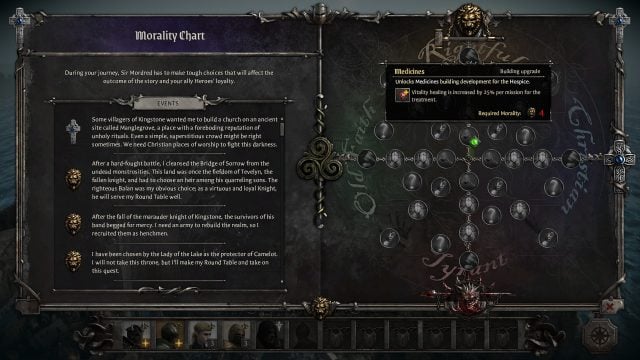 To keep track of the Story, Heroes and their backgrounds, Lore and Tutorials, a dedicated Journal button is now available in the overworld Map of Avalon. My only gripe with this new feature is I would have preferred it to have a comprehensive list of main and side missions so you can track the ones you’ve recently unlocked and completed. I hope they’ll add this in the next patch so it’s easier to monitor rather than scrolling all over the map to determine the quests to do next. 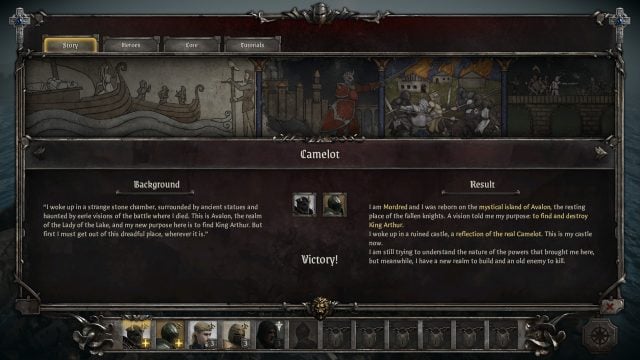 Combat balance has been tweaked such that Healing Potions are now regularly available and can be purchased from the merchant. Moreover, these drop more frequently than before. This is a useful change considering the game’s difficulty and the fact that you can’t go back to the overworld map midway into starting a mission to buy more potions. Also, Active and Passive Skills have been rebalanced together with enemy AI and certain encounters.

The rest of the patch goes into detail about the different bug fixes and miscellaneous improvements that have been added into the game. Fixes include the lifting of curses in the Enchanted Tower after completing the designated set of missions as well as the inclusion of Healing Potions for some of the heroes who’ve recently joined you in quests. 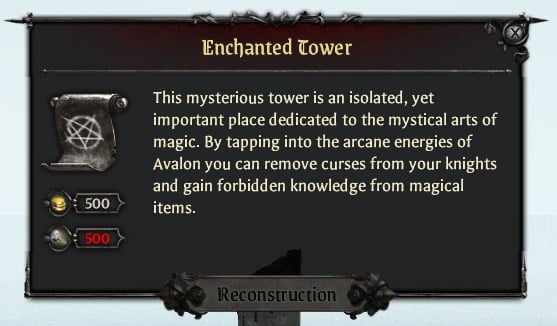 Additionally, with regard to the improvements, the Vanguard Class now has the ability to Hide when the hero moves into certain parts of the ground. Because of this, they can surprise enemies, thereby dealing extra 50% damage with whatever Skill they use next. Another update is a cosmetic change that shows you the AP cost of all Active Skills in your Skill Tree. 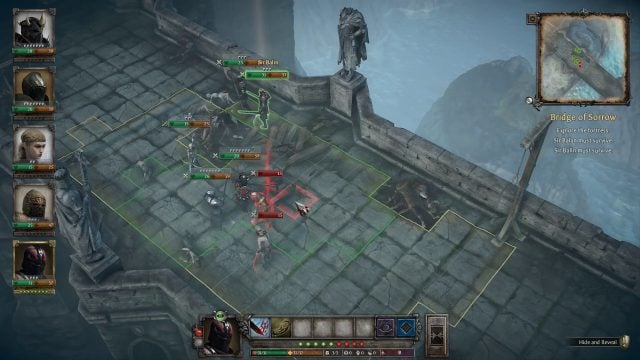 In this section, we’ll go over the changes we wish to see in the upcoming Summer 2021 phase for King Arthur: Knight’s Tale.

After playing a couple of hours on this patch, I’ve encountered several bumps related to the game’s brutal difficulty. King Arthur: Knight’s Tale doesn’t hold your hand at all especially after these new changes. And you’ll discover it for yourself as you try out new missions that you think you could smoothly breeze through. The difficulty is partially attributed to the number and types of enemies you encounter in a single map. However, you can opt to rush to the main mission itself to at least reduce the chances of receiving ailments and dying and to get all the loot you’ve collected.

I’ve noticed that in some quests there are save checkpoints, which allow you to restart certain encounters as opposed to starting from the very beginning of the mission like in the Bridge of Sorrow. In future patches, I hope they provide an option for us to manually save during missions to ensure that we get the loot we want in those runs. 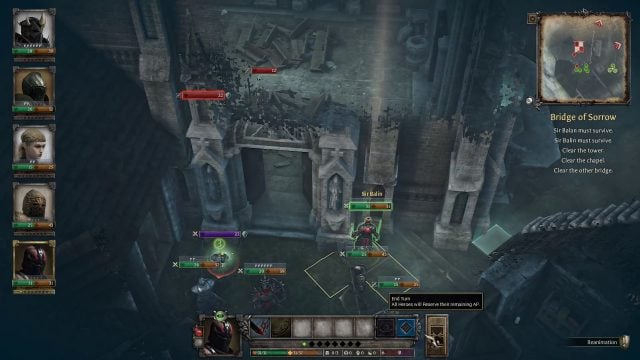 In relation to this, Neocore Games is also planning to add more difficulty settings to help balance the game. But I think one of the best ways to improve combat and difficulty is to increase the number of active heroes at higher levels that can fight alongside you instead of limiting it to 4. This would give you more flexibility to combine Ranged and Melee-Based Classes especially if the ones you’ve recruited are currently crippled by their injuries. Considering that there are more than a handful of heroes you can recruit, this is a viable solution.

When it comes to King Arthur: Knight’s Tale’s economy, specifically in recovering from ailments, it’s probably best to lower the length of accomplished missions or gold spend as you wait for your heroes to feel better. What happens now is at earlier levels, the game can feel punishing as soon as enemies begin to hit your Vitality because you become susceptible to curses and additional wounds. And in order to heal from these, you’ll have to leave the affected hero in Camelot for a period of time, say for 4 missions like in Darkest Dungeon, if you don’t shell out some gold to shorten this duration. What I do propose is to lower both requirements especially when you’re starting out. During that time, resources are scarce and there aren’t enough suitable heroes that can take the place of your injured allies. 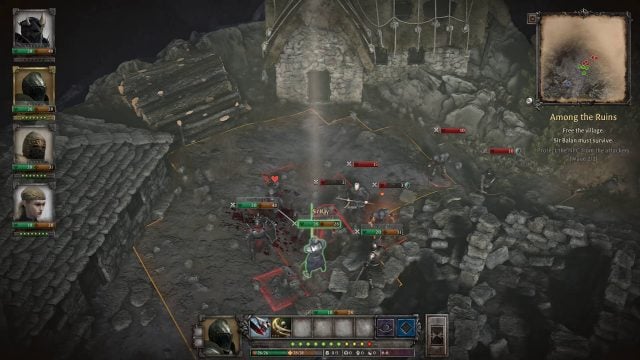 In the Summer 2021 Phase, Neocore Games confirms that another playable Class, the Sage, will be added soon. This is what I’m really excited about because I want to see how effective this healer is when it comes to providing extra protection for our heroes. Will the Sage also have damage-dealing Skills similar to that of a Cleric? Or will it purely be a support Class to heal and to debuff the rest of the party in battle? Depending on how viable this Class is, it may make managing your heroes much easier, as they shouldn’t need to rest and recover quite as often. In this case, the changes I suggested above may not be necessary.

The last piece I’m hoping to see next involves an inventory Quality of Life change. Currently, the newest Weapon, Armor or Potions you acquire are glistening in your inventory and are randomly placed. It would be better to have a feature to sort out inventory since there’s no way to arrange equipment according to their rarity and Stats, which makes it easier to select the gear we intend to wear. 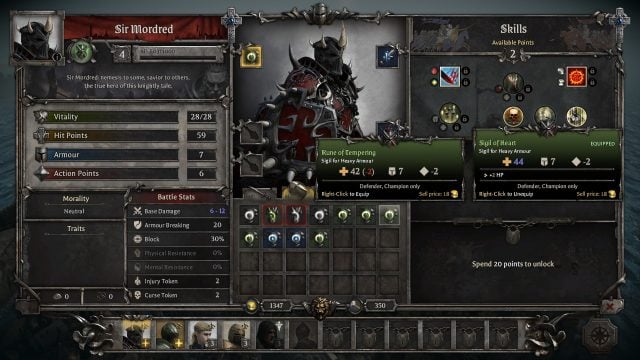 Want to know what we thought of the game? Check out our King Arthur: Knight’s Tale Preview And Gameplay Impressions.

The post King Arthur: Knight’s Tale Patch v0.0.4 Breakdown – What It Means And What We Want To See Next appeared first on Fextralife.