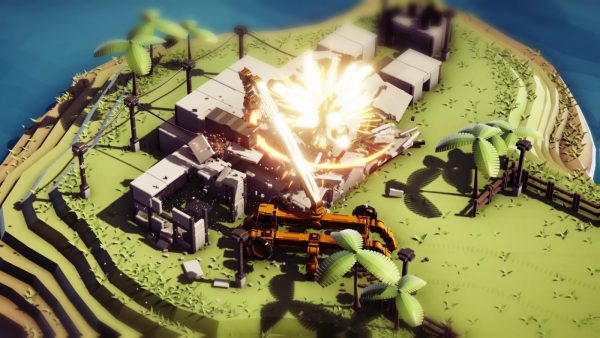 Radiangames has announced Instruments of Destruction, a vehicle-building sandbox title from the one-person creative force that is Luke Schneider.

You may recognize that name. Schneider has been making quite an impact on the indie scene since he left developer Volition after working as the lead tech designer on the esteemed Red Faction Guerilla.

Since then, he’s launched a run of fun and immensely playable titles including the likes of Speed Demons, Slydris, and Devastator. And his latest game looks to continue delivering on that high-quality setup.

As per a post on the game’s Steam page, “Instruments of Destruction is a vehicle building sandbox with many possible directions, lots of player creativity/control, and high replayability, and those attributes make it a great Early Access title.”

As you’d expect from a game developed by someone that has Schneider’s history, you can demolish every structure in the game piece by piece, and every object you see in the game world (save for small decorative plants and rocks) is part of the physics system. “Each element of the world interacts with each other and together they create a physical, visceral world to play with,” as per the developer.

Schneider notes that though the game will be fun and kinetic in all the right ways in its Early Access form, the community feedback he gains during this period will be integral to helping the game evolve and grow.

“The game is a work-in-progress, and currently has 40+ parts to build vehicles […] and 4 polished levels. Before launching into Early Access (planned for late 2021), the number of levels will be increased significantly, and some game systems (such as objective tracking and audio) will be added/improved.”

The title is due to enter Early Access in 2021 on PC, but beyond that no other dates or platforms have been announced.

The post Instruments of Destruction is the latest game from Red Faction Guerrilla’s lead tech designer appeared first on VG247.