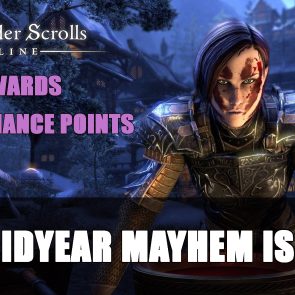 The return of the PVP event Midyear Mayhem is happening this week. Earn boon boxes, event tickets and rewards.

The Midyear Mayhem PvP event once again returns to Elder Scrolls Online but with some brand new rewards to collect. Along with the usual double XP and Alliance points, you can gain unique collectibles including the new alliance banner-bearer staves and shield outfit style pages.

The event will take place on Thursday, June 24th at 10:00 AM EST and will end on Tuesday, July 6th at 10:00AM EST. Players can take part in either  Cyrodiil, Imperial City, and Battlegrounds activities. In order to receive the bonuses you will need to do the following:

Once you pick the Scroll of Pelinal’s Ferocity it’s yours to keep and can be re-used throughout the duration of the event. 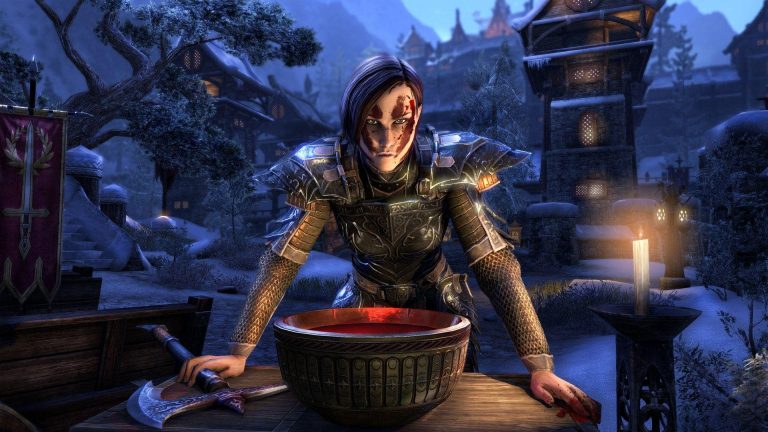 Those who have already received the scroll in the previous year’s event can use it for this year’s event too. Did you misplace your scroll? Not a problem, simply purchase another from Predicant Maera for 100 gold or 100 Alliance Points. You can also use the Basin of the Gore Virtuous instead.

This Midyear there are new motifs to gain in the style of your alliance. This includes the new Alliance Banner-Bearer staves and Shield Outfit style pages. You can gain these by collecting 10 Alliance Banner Emblems from the Midyear Mayhem Boon Boxes and combining with the associated license, one for the shield and one for the staff. These licenses can be purchased from the Predicant Maera for Alliance Points. The style page you receive is determined by your character’s chosen Alliance.

Gain the Ebonsteel Armor Outfit Style pages and become a true knight of Tamriel. You can gain these by defeating bosses in the Imperial City, as well as those found in the city itself and the sewers.

As per usual you earn yourself the Midyear Victor’s Laurel Wreath collectible by heading to the battlefield and completing the following Achievements:

You will need the Imperial City DLC game pack in order to access and the Imperial achievements, which you can pick up FREE from the in-game Crown Store or if you have access to ESO Plus you will also be able to take part.

Only through Midyear Mayhem will you receive Pelinal’s Midyear Boon Boxes which will be in addition to Rewards for the Worthy containers. During this year’s event, you will be able to earn Boon Boxes from repeatable Town, Battle, Conquest, Scouting, and Warfront quests that take place in Cyrodiil in addition to Battlegrounds repeatable quests all adding to further XP.

You can get these in addition to your regular Rewards for the Worthy containers and as PvP daily quest rewards from the following:

Rewards from the Midyear Boon Boxes:

Note that during the event, all nodes in Cyrodiil and the Imperial City will drop double the normal resources, and the Cyrodiil PvP merchant Adhazabi Aba-daro (The Golden) will have Alliance War Legendary-quality jewelry available. The first weekend you will be able to purchase necklaces and the second weekend you can obtain rings.

Adhazabi can be found in the following places:

Aldmeri Dominion : Western Elsweyr Gate, north west of the bank on the minimap

You can also gain tickets to go towards the Unstable Morpholith pet, which you can use Event Tickets to purchase. Event Tickets are earned by completing the PvP quests as follows:

The maximum amount of the Event Tickets you can hold is 12, so make sure to use them before completing new quests as you will lose them. The Event Ticket timer resets at 2:00AM EDT each morning.

Everything you can gain from the Impressario merchant during this event:

After collecting all three upgrade fragments for the Deadlands Firewalker Personality, you will be able to access this new collectible from your Collections UI.

The Midyear Mayhem event begins on June 24th, don’t miss out on gaining some glory and some rewards. If you want to know details of more content coming this year for The Elder Scrolls Online be sure to check out next Elder Scrolls Online Deadlands DLC Revealed Releasing Fall 2021.