Activision Blizzard is currently facing serious ongoing allegations of harassment and mistreatment of marginalized workers. To learn more, please visit our timeline as well as our in-depth report on the subject.

A new Crash Bandicoot video, and promotional material celebrating the series' 25th anniversary, appear to include further indications that the rumored Crash Bandicoot PvP/PvE/party game known as Wumpa League is real and is on its way.

On September 8, certain members of the press (including IGN's Jonathon Dornbush!) and influencers received a Crash Bandicoot 25th anniversary package ahead of today's anniversary (September 9) that included a "BIG Wumpa piñata," a mallet, and a postcard. 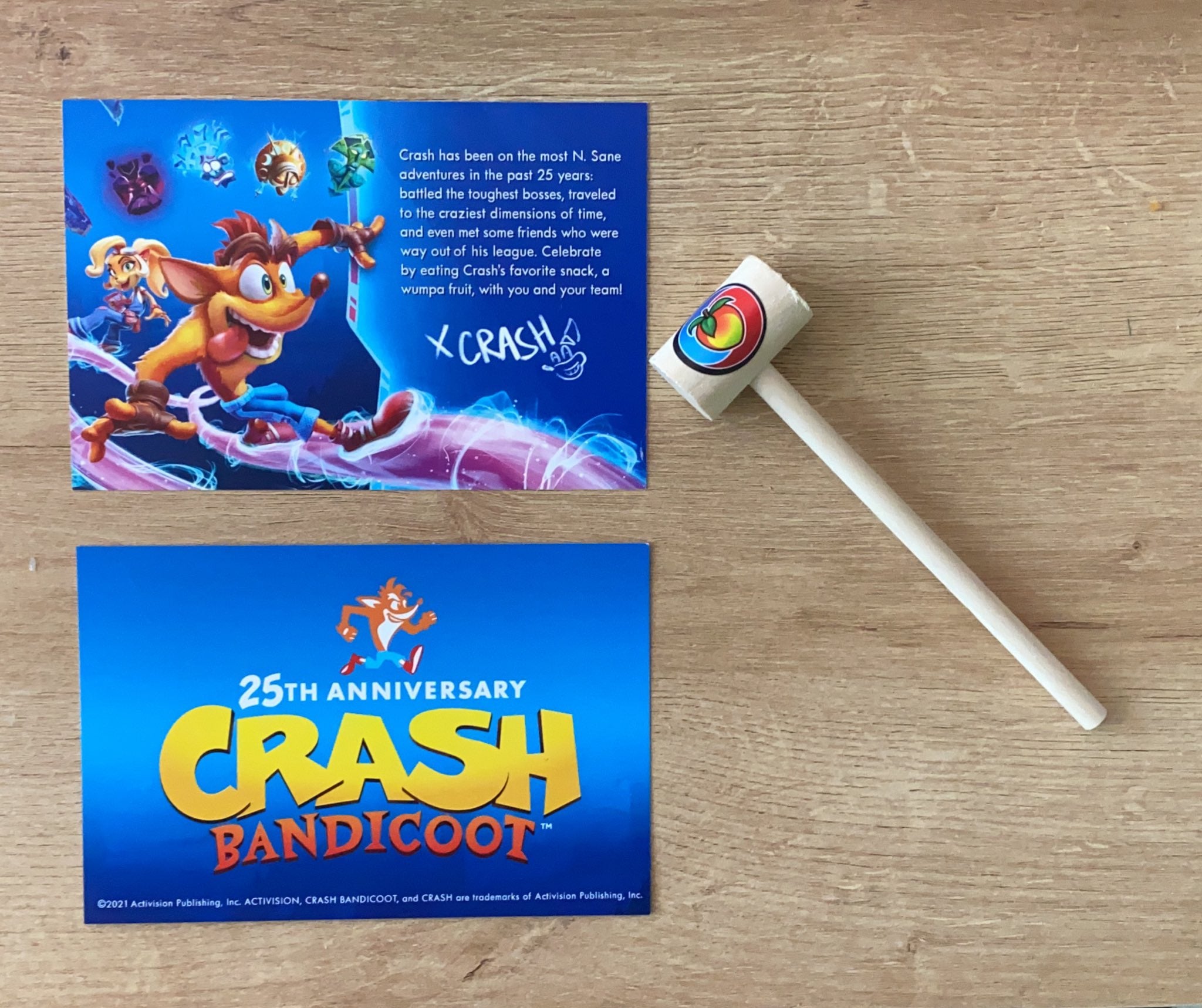 What IGN and many others noticed was not only the logo on the mallet, but a line on the postcard that says, "…even met some friends who were way out of his league." These both very well may be hinting at an upcoming announcement for this Wumpa League game.

For those unfamiliar, Wumpa League, according to video game historian Liam Robertson, was/is allegedly "an online multiplayer Crash Bandicoot game or add-on for Crash 4" that would be "a competitive multiplayer collectathon platformer with open 3D environments."

Players would be part of either an Orange team or Blue team – hence the logo's colors – and you would collect the iconic Wumpa Fruit spread around the levels and try to bring them back to your base. There was said to be a focus on skins and XP progression, and Spyro would apparently appear as a backpack/parachute.

This obviously did not make it into Crash Bandicoot 4: It's About Time, but many believe that Wumpa League (or some version of that title) is still on its way. One of the biggest reasons was a tease at the end of Crash 4 if you completed everything the game had to offer.

In the game's first level, there was a TV that, when hit, would switch channels to an image of each Crash game through Crash 4. After the fourth one, the screen would go blank. However, when players reached the top completion level of 106%, a fifth hit would cause a logo to quickly pop up on the screen that is very similar to the one now being teased again.

There's a new image that appears on the TV after you beat the game? Teasing Crash 5 or a spinoff? #PS4share pic.twitter.com/w6cEKJwcaE

Speaking of teases, Toys for Bob shared a heartfelt message for Crash Bandicoot's 25th anniversary, and while no new game was announced, an updated version of that logo appears at the 1:12-minute mark. Furthermore, the devs thanked the fans for their support of Crash over the years, and they ended by saying, "Happy 25th anniversary, Crash, we'll see more of you very soon."

Time to have a Bandi-hoot and Wump into the 25th Anniversary of #CrashBandicoot 🎉🥳🎉 Celebrate with the Devs from @toysforbob and look back at all the N. Sanity #Crash25 pic.twitter.com/kMU1VS722I

While this is only a tease and could end up being nothing at all, this will hopefully be a sign of good things to come for fans of the franchise that began on the original PlayStation in 1996.

It's also important to note that this isn't the first time the company has teased upcoming games in this fashion, as it sent out a purple egg from a "Falcon McBob" ahead of the announcement of the Spyro Reignitied Trilogy. While this isn't quite the same, it shows a bit about the company's history in revealing its games.

For more on Crash Bandicoot, check out our review of Crash Bandicoot 4: It's About Time and all the upgrades that were added for the PS5 and Xbox Series X versions earlier this year.

Have a tip for us? Want to discuss a possible story? Please send an email to [email protected].

Adam Bankhurst is a news writer for IGN. You can follow him on Twitter @AdamBankhurst and on Twitch.