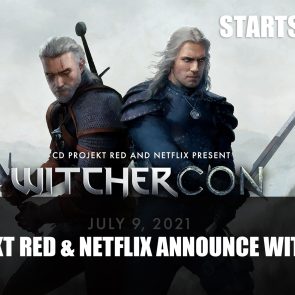 CD Projekt Red and Netflix have announced a virtual fan event WitcherCon, releasing first details and the date for the event.

Announced via a Twitter conversation with the developer CD Projekt Red and streaming platform Netflix will be holding a virtual mult-format event dedicated to The Witcher universe.

WitcherCon will take place on Friday July 9th 2021, meant for both Witcher fans old and new, bringing both the love The Witcher video games and the TV series together.

WitchCon will be livestreamed on both Twitch and Youtube on the first one airing on July 9th at 7:00 PM CEST. The second separate stream will be on 03:00 AM CEST on July 10th.. Both stream will contain exclusive content according to the press release.

We teamed up with @WitcherNetflix to bring the world of The Witcher into your homes! Power up your megascopes on July 9th and join us for an epic online celebration of the franchise, #WitcherCon! pic.twitter.com/6RlGL5mPox

The event details have been outlined below:

For the full schedule you can check it out on the WitcherCon website.
If you’re currently diving into the Witcher be sure to drop by our The Witcher 3 wiki.

For more news be sure to check out next Kingdom Come: Deliverance Announced To Be Coming To Switch and Mortal Shell: The Virtuous Cycle DLC Announced.