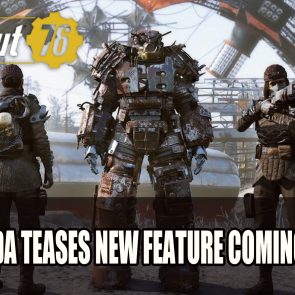 Bethesda recently has released the Steel Reign update for Fallout 76 but are now looking ahead to the next content and features for the game.

With the recent release of the Steel Reign update for Fallout 76, Bethesda are already looking ahead to their next feature. On the Fallout 76 blog, Bethesda announced they are looking into reopening the Public Test Server for the game this month to test a new feature and gain feedback from players.

While there aren’t details on the exact feature to be tested hopefully we’ll be hearing soon and when the Public Test Server will be returning.

We haven’t yet discussed what’s in store with the September update, but it will include a significant new feature that will give players even more variety in how they choose to experience Fallout 76. We’re shooting to re-open the Public Test Server this month so that the community can dive into this new feature and begin sharing their feedback with us as soon as possible.

Recently Fallout 76 receive its latest update Steel Reign which adds the conclusion to the Brotherhood of Steel story. The update adds a new questline, new locations, gear, Season 5 Scoreboard and Legendary Upgrades. The update is available for free to all Fallout 76 players, but players will need to have reached level 20 and have completed the “The Best Defense” quest to access the new content.

Fallout 76: Steel Reign is available for free for all Fallout 76 players.