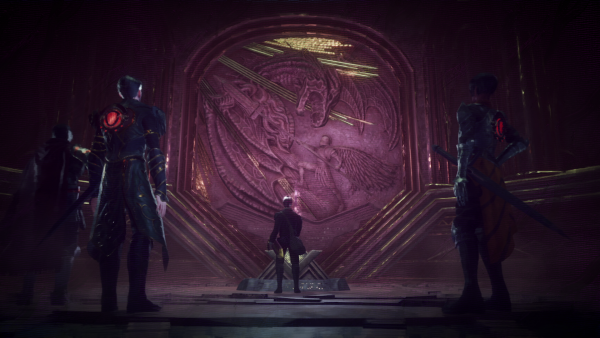 Platinum Games‘ action-RPG, Babylon’s Fall, is coming to PS5, PS4 and PC. It’ll be a live service game, and there will be a PS5 beta soon, Square Enix announced at E3 2021.

Square Enix re-announced Babylon’s Fall in December 2019, and since then we’ve heard precious little about the Platinum-developed title. Luckily today, at E3 2021, we heard more about what we can expect from the upcoming title when it lands on PS4, PS5 and PC.

The most interesting morsel of information we learned about the game during E3 2021 was that it’s now looking at a live-service model; a pretty interesting and peculiar choice for a single-player/co-op action-RPG – but that’s Platinum for you.

According to the game’s YouTube trailer description, we’ll even get new “game modes” as time goes on, and all new content in the game will be launched for free.

“In Babylon’s Fall, players become a group of warriors known as the sentinels, bonded with special equipment called Gideon Coffins, and throw themselves into an odyssey to overcome the titanic Tower of Babylon, within which sleeps a great legacy,” explains a press release.

“In addition to weapons wielded in both hands, characters can use the power of their Gideon Coffin to equip two more, allowing for combinations of up to four weapons at once. The capabilities of different equipment will also bring endless variation to the strategy that can be employed. The game’s visuals are achieved using a newly developed “brushwork style” to create a unique fantasy setting with a medieval oil painting aesthetic.”

If you’re a fan of Platinum’s hack-n-slash combat – the sort of thing you’ll find in Nier Automata and so on – this will likely be up your alley.

We currently do not have a release date for the title, but you can sign up for the beta on the game’s official website.